Action Animation - The Most Recent Films

My film "TV-set" was included on a DVD which presents a compilation of  the most recent Polish animated films.

"Our purpose was not only to present the most interesting film-makers of the last few year but also to show a fragment of the history of Polish animation; the fragment proved to be, to a considerable degree, a lost time for Polish animation due to political transformations and changes in means of financing culture. Therefore, we assumed that the period of time that is of interest to us is from 1989 till present [...] We hope that "Action Animation" accurately portrays the youngest generations of animated film-makers in Poland. "Young animations" addresses a variety of issues and problems: nostalgic stories about the transience of life and loneliness are interwoven with fierce criticism of consumerism; subtle films about love are contrasted with bleak visions of the future. The authors experiment with film psychoanalysis and "play chess" with reminiscences.

When choosing a title for our collection, we wanted it to reflect the diversity of techniques used by the young authors: there are examples of classic and computer animations, stories painted just right under a camera - on glass and canvass, collages of drawings and live action films and cut-outs. In addition, "Action Animation" constitutes a record of transformations which have taken place in  Polish animation within the last two decades, presented from the perspective of the young film-makers. The set of DVDs thatwe present is an essential supplement to the three previous anthologies, which presented a historical look at Polish animation." (an excerpt from the introduction by Mariusz Frukacz)

You can buy the DVD here 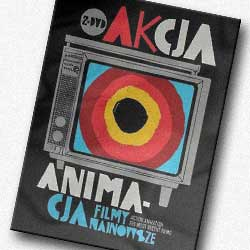